Last Friday night, I ran yet another prototyping session. This time, we were finally using the custom interface I finished hacking together. The parameters for the prototype were:

My three main goals for this prototype were:

The prototype took place in my kitchen and Reluctant Cook’s kitchen, with me observing “on location” at my kitchen.

There were a few minutes dedicated to upgrading to the latest version of Flash and getting the videos to connect. Then a few more spent finding spots for the laptops that afforded the best views of the kitchen. Video setup and laptop positioning have been recurring themes, but I think this time it took longer due to Flash being uncooperative. Experienced Cook finally settled on the top of the fridge (something he’d surely seen me do from earlier prototypes) and Reluctant Cook followed suit. 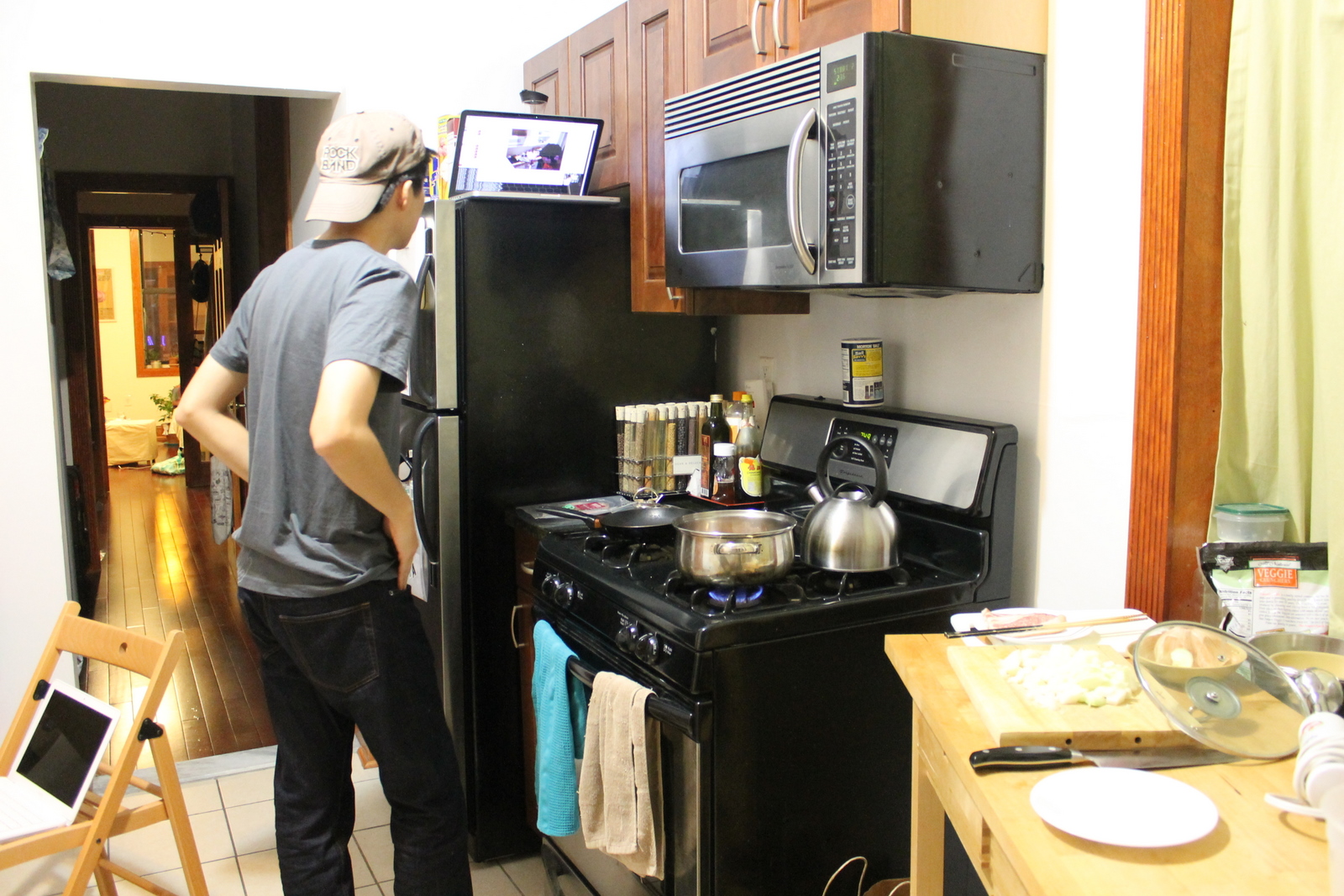 Because Reluctant Cook had never seen the interface before, Experienced Cook took a few seconds to explain keyboard navigation. This was quickly understood and accepted.

When cooking got underway, I noticed a few things that hadn’t occurred to me before because I had been participating:

Cooking went pretty well for the first few minutes. Experienced Cook had taken on the role of instructor and was showing off onion cutting technique, talking about ingredient characteristics etc. At this point, he had moved his laptop to the counter to zoom in on the cutting board. Reluctant Cook was paying close attention during these “demo intervals” and then going back to his work surface to try them out. There was a continual stream of advice and feedback between the two.

About an hour into the prototype, the video quality began to degrade significantly. Frames were freezing, audio was getting lost, and it just became unusable. Cooking came to a standstill. At this point, I intervened and suggested both parties hop on iChat Video Chat. Once they switched, cooking resumed. There seemed to be a sigh of relief on both sides, because compared to the OpenTok video, iChat was blazingly fast. I recall one of them saying “Seamlessness is nice, but image quality is more important.” Agreed! 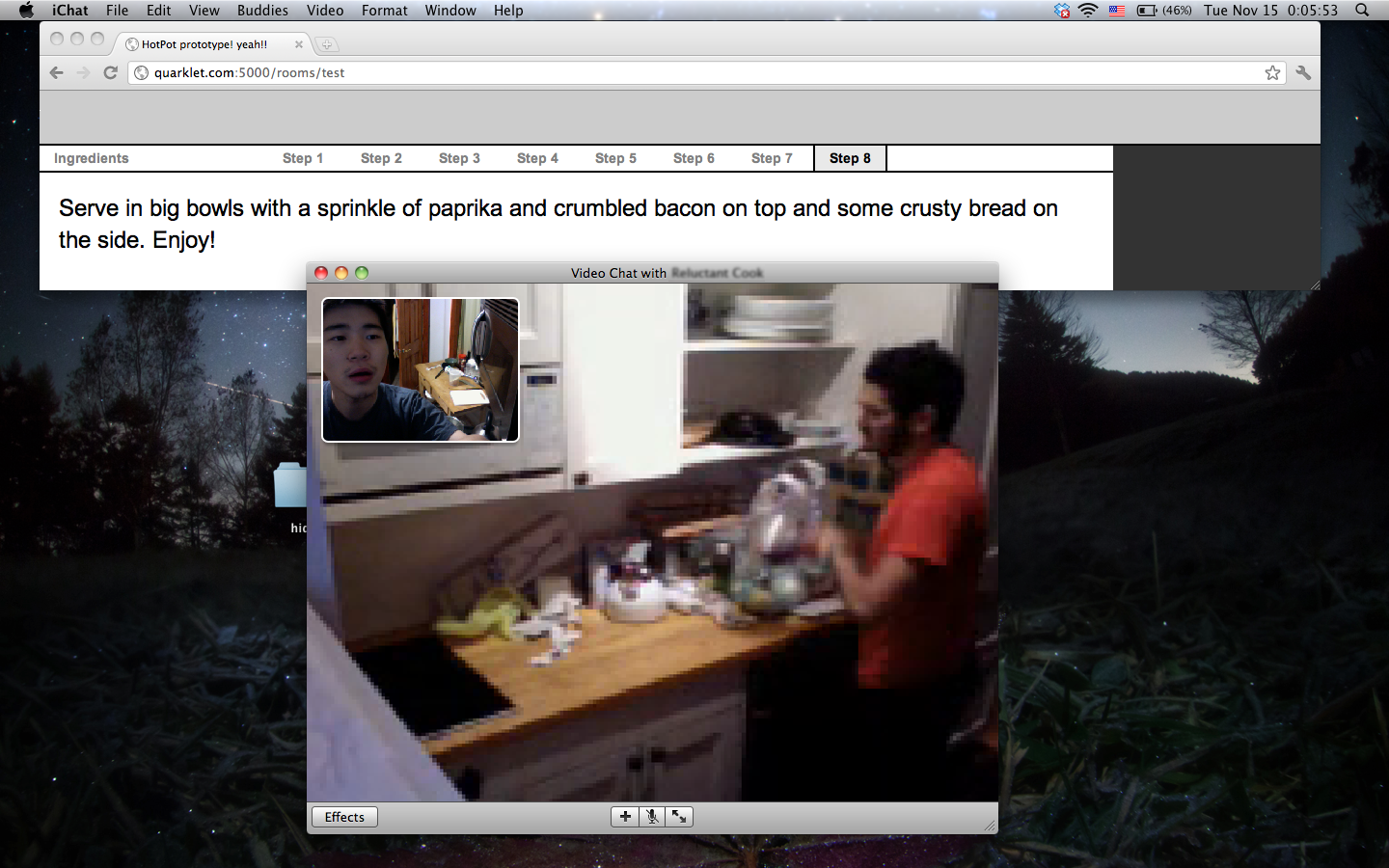 They made it work with an iChat + custom interface hybrid... the best of both worlds!

Some favorite quotes from throughout the process:

Total cooking time was about 2-and-a-half hours! By the end, everyone was hungry, but I was impressed that neither party complained that cooking took too long. They seemed to be mostly having fun, talking about other things, goofing off, etc. RC also took time to give me direct feedback on my thesis, which I’ll discuss in my next entry.

At the end, we served up three bowls of soup, and we all ate together, with Reluctant Cook on the other end of video chat. Here is the view from his end: 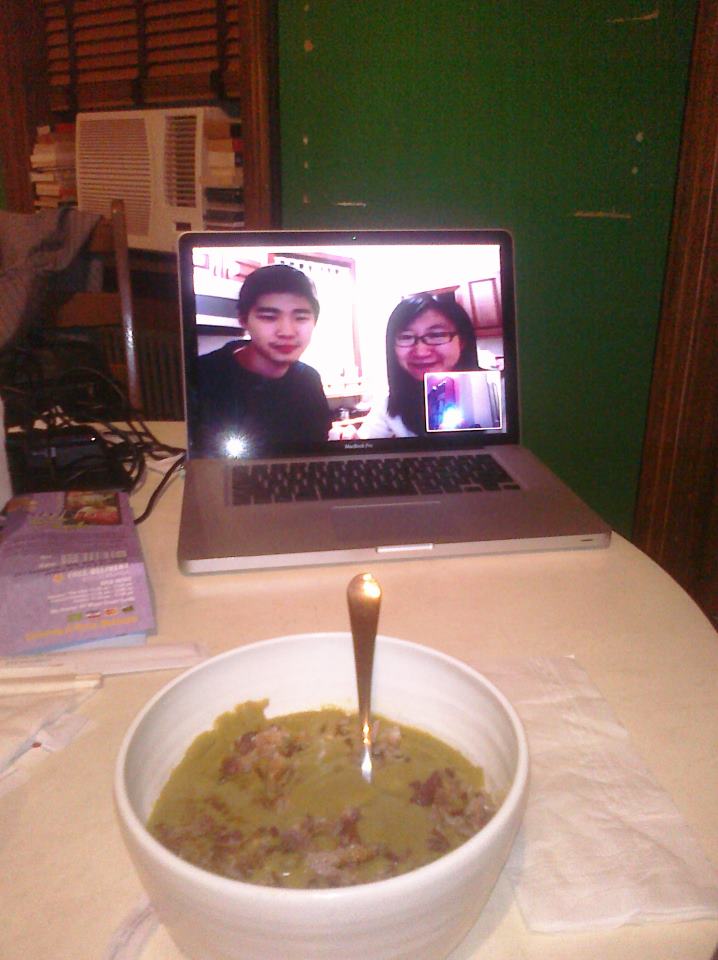 Like with Prototype 2, there was that feeling of “togetherness,” although this time we didn’t have Time Zones to contend with. My favorite part?

He later explained that he had been sick all week, and had been ordering soup from area restaurants. None of it, though, compared to the soup he had just tasted. (At this point, EC and I were too proud of RC for words. Not bad for a first-time cook!)

The biggest lesson I took away from this is that you do not compromise on video, period. Once video started to freeze and stutter, cooking just stopped dead in its tracks. I had desperately hoped that OpenTok would suffice despite not being the best, because I was so focused on the idea of having a nicely integrated video chat experience. But in doing so, I allowed my optimism to cloud my judgement. That’s a lesson for the ages: sometimes you have to “kill your darling.” My hope is that the platform will get better over time as the technology improves, and then I really can embrace it for this project, but for now, I really do have to look elsewhere.

Fortunately, elsewhere doesn’t seem too far off. The second thing I learned was that coupling my custom interface with another video chat solution worked surprisingly well (Probably because, in this case, both participants were tech-savvy and both happened to be on Macs). Setup was surprisingly quick (actually faster than setting up the Flash for the custom interface…) and the video quality was clearly superior. That in mind, I wonder if I should actively make that the standard way of doing things from here on out? So that, instead of spending any more time trying to include seamlessly integrated video chat embedded right in the interface, I allow participants to use their video chat method of choice?

This probably changes a lot of what I do next. There are new questions to answer, like how to make that dual setup process as smooth as possible? Additionally, this probably means I will not be able to launch this as a fully-functioning alpha product, and instead should position it as an advanced prototype. This is because, in the end, I still think an embedded video chat would offer the best experience, especially to less-techy users who don’t want to fiddle with a second program. But the writing is on the wall: it’s isn’t going to happen, not with my current resources.

Instead, I should take Reluctant Cook’s advice. He said that technology advances so fast these days that video chat is practically a problem that will solve itself. Instead of worrying about that, I should focus on other possible features that would make this a truly compelling product, especially those revolving around the actual topic of food and cooking.

And this brings us nicely to my next entry, which is Reluctant Cook’s feedback…