One key learning from week 1 of live prototyping is that the drop-off rate for the invitation to cook process is really high. To try and understand why this was happening, I made a user flow documenting how people were using the site now. (Click below for a larger version.) 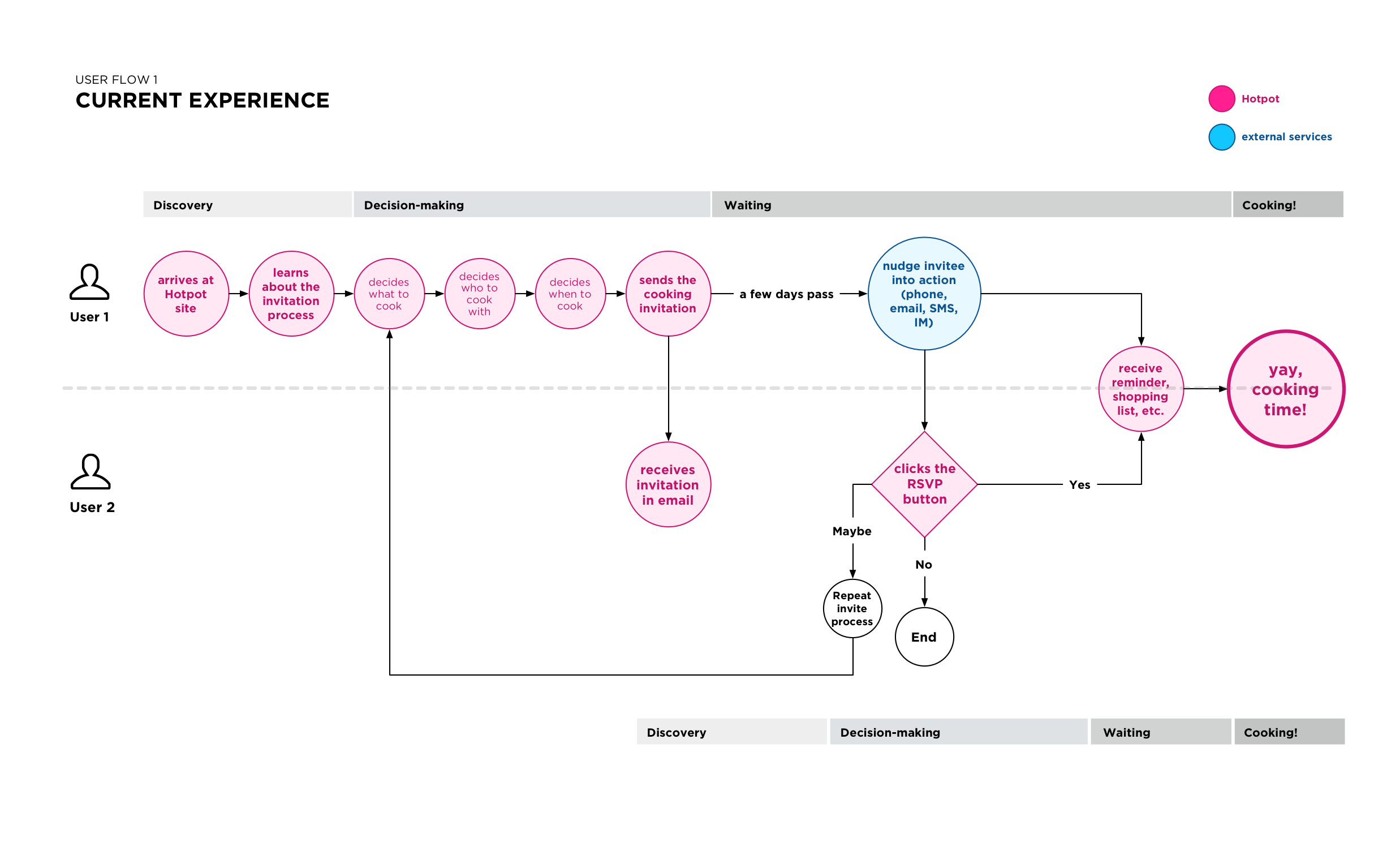 Seeing this laid out again after the prototype gave me a completely new perspective on the user flow. Though people were using the site more or less exactly how I designed it, two things immediately stood out to me:

Overall, it’s a pretty lopsided and, as a result, inefficient process. All the decision-making is accorded to the first user, while the second user can undo all those efforts with a single click. Ironically, I had designed it this way to make it more efficient… I had wanted to avoid a protracted discussion on ideal cooking times that leads nowhere, resulting in cooking that never happens. However in reality, people had this discussion anyway, outside of Hotpot’s purview. And forcing people to send all those ‘concrete’ invites resulted in a lot of wasted back-and-forths. Some even abandoned the process after a it resulted in a “maybe” the first time.

One new development was the blue circle: people needing to nudge each other into action because quite often the invitation email went ignored. I hadn’t quite expected that this would play such a big row, but in hindsight, the necessity for that nudge makes a lot of sense. We get so much email these days, it’s common practice to bypass an email from an unfamiliar service or website.

Looking at this, I realized now that I made the classic mistake of being an overzealous designer, trying to design everything. Instead of recognizing that Hotpot exists within a crowded network of services used by a single person daily, I had tried to make Hotpot take ownership of almost the entire communication process. Rather than allowing friends to communicate in whatever way was most natural and effective for them, I was asking them to use this specialized invitation which lacked the social capital to attract attention.

The “formal invitation” was one of my early darlings going all the way back to October. It was spurred on by a lot of positive feedback, supporting the idea that it helps make the cooking event feel even more special. Now I know this is not exactly true: an invitation email, no matter how well-designed, is not going to feel special in a crowded inbox.

Again, this is exactly why you make a live prototype.

So what would an improved process look like? Here’s one take: 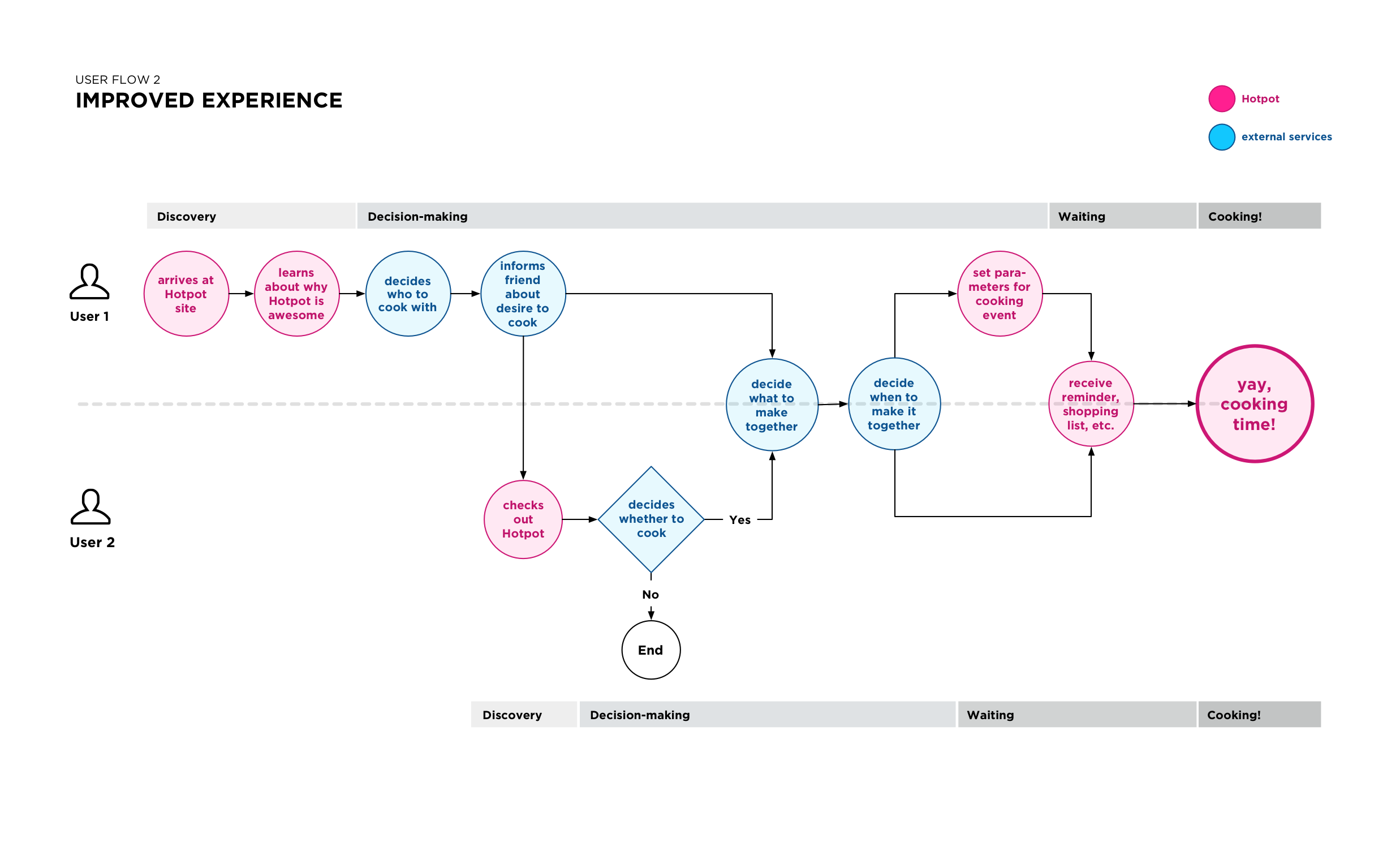 In this version, I aimed for a few things:

Doing this was extremely useful in helping me to imagine the next steps. I admit to feeling rather lost and helpless last week, as I couldn’t quite figure out why people weren’t using this thing I worked so hard to make. Now, I have some concrete clues as to what to do in the remaining weeks.

I think that, rather than adding more features or imagining a fancy future for the product, I would rather make improvements to the existing prototype. My biggest hope is, by the time thesis is over, people will actually use this to cook with their friends. Rather than attempt to inspire and delight my thesis audience with visions of a beautiful imagined future, I want to inspire and delight with the actual experience of cooking with your friends. That alone, I think, will have enough beauty to fill an auditorium.