On Sunday evening at 8, I ran my first prototype. Six friends and I gathered on Google+ Hangouts to cook Roasted Butternut Squash and Apple Soup. The purpose of this prototype was to understand what the actual experience of cooking while video chatting would be like. 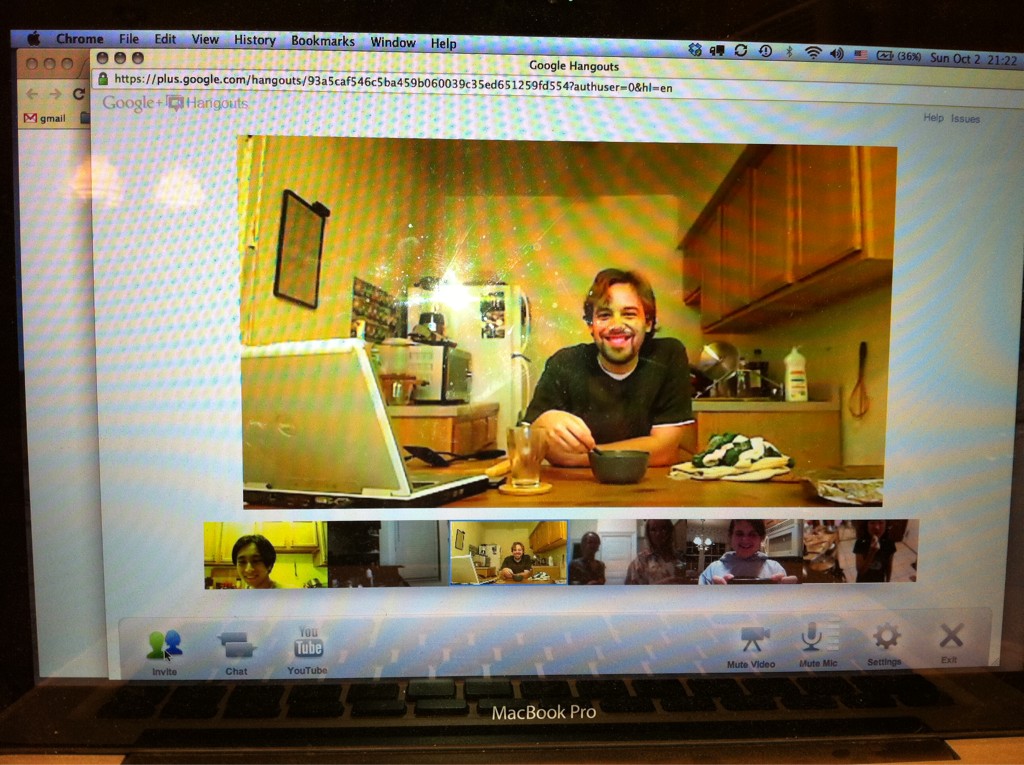 The entire test ran from 8pm to roughly 10pm, taking somewhat longer than I had expected. Reasons for this included troubles with the technology, inaccuracies in the recipe itself, and differences in cooking styles (one group doubled the recipe, thus taking longer to chop and prepare the ingredients).

Some notes on the findings:

On Tuesday, I sent out an invitation with a set date and time to 10 friends. About half responded “yes,” and two more said they would like to come but unfortunately couldn’t make it. The reception was overwhelmingly positive, a good sign!

The invitation included a description of what was to occur, an ingredient list and a link to the recipe itself. I purposefully chose a recipe that was very season-appropriate. There was little to no confusion about how this was going to work— I think everyone was fairly familiar with the idea of Google+ Hangouts / video chat.

The day before, I also sent out a shorter reminder email that included the ingredients list again.

On the big day, there was some fumbling with the video chat technology early on in the process, but by 8:10 we were all present and introducing ourselves. The Google+ Hangouts interface is fairly easy to use. The only difficulty came when some of us dropped off and had to be reconnected to the same hangout.

A nice feature of the Google+ hangout is that it takes away the awkwardness of everyone having to learn everyone else’s names at the beginning. You can mouse over the video thumbnails at any time to get that user’s name.

The video was choppy and sometimes would freeze, but the sound quality was very good. I found the video quality not to be too much of a problem since most of the time you’re looking down at the prep surface. I only looked up at the video during breaks, or when someone asked me a question directly.

Side note: I also covered my laptop with plastic wrap beforehand. It works really well! You can still type with ease and use the trackpad, but the keyboard becomes essentially waterproof. However, as it turned out, I did not find myself typing much at all. My hands were far too busy chopping, stirring, and sautéeing!

We kept to a fairly unstructured format, allowing each participant to go at their own pace. The biggest difference in prep styles came in chopping the butternut squash. Some bought pre-cut squash, some had already cut theirs before the prototype started, and others (me included!) had to clean, peel and chop it. There was about a 35-minute difference between those who were cooking fastest and those cooking slowest. There was also much deviation from the recipe itself.

The difference in cooking times didn’t seem to affect the experience negatively, as it then became possible to ask one another “How did you do this previous step x?” Though, towards the end, I got a little impatient waiting for my soup to finish as some of my friends had already started eating. They ate with us, observing us and offering tips along the way.

We talked mostly about the cooking process—asking each other for tips, whether one deviated from the recipe, etc. There were some side conversations here and there about weekend outings. (We also got to say hi to my friend’s dog on camera!) In the beginning, we also discussed ingredients (especially the squash, and whether buying pre-cut constituted “cheating”).

Communication was exclusively via video, and for the most part audio-only would have sufficed. I had hypothesized that we would be using text chat to complement the video, but we didn’t at all. Voice-chatting is much easier when you have your hands full dicing squash.

One problem with communication was that, with 7ish people total, there was 1) a lot of background noise from cooking and 2) it was sometimes hard to tell who was saying what or talking to whom. However we worked out a system of addressing each other by name and speaking extra loudly when we wanted each other’s attention.

Another issue was that it was difficult to have a good camera angle for some of us. In small apartments with limited counter space, there isn’t always a good place to put the laptop. Some of us went for face-only shots, others (me included) tried to point the camera at the entire prep surface so you could see what was going on. This for me meant putting the laptop on top of the fridge. While this afforded everyone a good view of my kitchen, it was hard for me to see the small video thumbnails along the bottom. The laptop was too far away, and the angle of the screen (half-closed) cut off the stuff at the bottom. These issues should all be addressed in the final interface design.

The “interface” consisted of a Google+ Hangouts window and a recipe zoomed in to 100% open in another tab. This required tabbing back and forth to switch between viewing the video and viewing the steps of the recipe. Those with a bigger screen or multiple screens were able to have the recipe open on one and Hangouts in another. This is more of an ideal setup, I think.

Conclusion and Next Steps

Cooking together is fun! This prototype has definitely helped give me the green light on moving forward. Now that I know that it’s not only possible, but actually enjoyable to have online “cooking dates” together, I can begin to address all of the problems we discovered above in earnest. I know that some of this will be bounded by the constraints of present-day technology, but many of the problems we identified are solvable through careful interface design.

The next step is to research technologies/tools for building a custom interface. I’ll continue to host Google+ Hangouts cook-alongs at least once every week to test different group configurations (size, relationships to one another, etc.).

To prototypers: Thanks, everyone, for helping me prototype! If you have anything to add, please use the comments section below. I also look forward to your survey responses (hint hint)